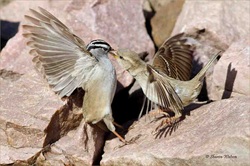 The House Sparrow is strongly associated with human habitations, and can live in urban or rural settings. Though found in widely varied habitats and climates, it typically avoids extensive woodlands, grasslands and deserts away from human development. It feeds mostly on the seeds of grains and weeds, but it is an opportunistic eater and commonly eats insects and many other foods.

To read more Cool Facts click on the link:  http://www.allaboutbirds.org/guide/house_sparrow/lifehistory