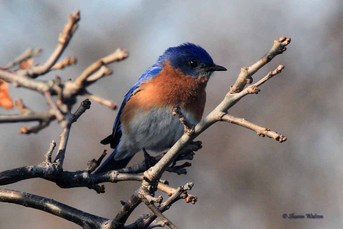 The Eastern Bluebird is a small thrush found in open woodlands, farmlands  and orchards, and most recently can be spotted in suburban areas.

Eastern bluebirds prefer to nest in woodlands where cavity holes excavated by a previous species will serve as their home. These woodlands must be near clearings or meadows because this is the preferred hunting ground of the species. River or creek access is an added benefit and preferred. Keep these things in mind when placing a nestbox on your property.

Approximately two-thirds of the diet of an adult eastern bluebird consists of insects and other  invertebrates. The remainder of the bird's diet is made up of wild fruits.  Favored insect foods include grasshoppers, crickets, katydids, and beetles. Other food items include earthworms, spiders, millipedes, centipedes, sow bugs and snails.
Cool Facts:
The male Eastern Bluebird displays at his nest cavity to attract a female. He brings nest material to the hole, goes in and out, and waves his wings while perched above it. That is pretty much his contribution to nest building; only the female Eastern Bluebird builds the nest and incubates the eggs.